ESI is a company that remains dedicated to the principles and values established by its founders. 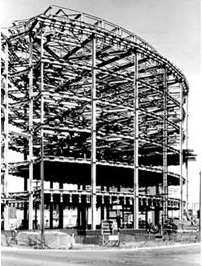 Orval Vieselmeyer graduated from Valparaiso University in 1948 with a B.S. in Civil Engineering. Following graduation Orval was hired by The Fuller Construction Company, where he managed projects all over the United States until 1963 when he decided it was time to settle down and raise his family.

Around the same time, Orval was working in upstate New York when he met Robert Dalrymple, P.E., and Edward Dalrymple, co-owners of Dalrymple Gravel & Contracting Corporation. The brothers aspired to form a general building construction company and approached Orval, who accepted their offer and the trio formed a union shop company called Dalco Contractors. After ten years of success the partners decided to start an open shop general contracting company to be more competitive in the private industry, so in 1973 Elmira structures, Inc. (ESI) was established.

In 1980, Kirk Vieselmeyer, P.E., graduate of Rensselaer Polytechnic Institute, joined his father at ESI. Then in 1989 Robert, Edward, and Orval retired and transferred ownership and management to Kirk. Today, Orval’s son Kirk, current

President and Owner, and grandsons Jared, Jeff, and Kyle, also Civil Engineers, ensure that the company remains dedicated to the principles and values established by the founders. Today, Kirk continues to play an integral role in leading the success and growth of the company.